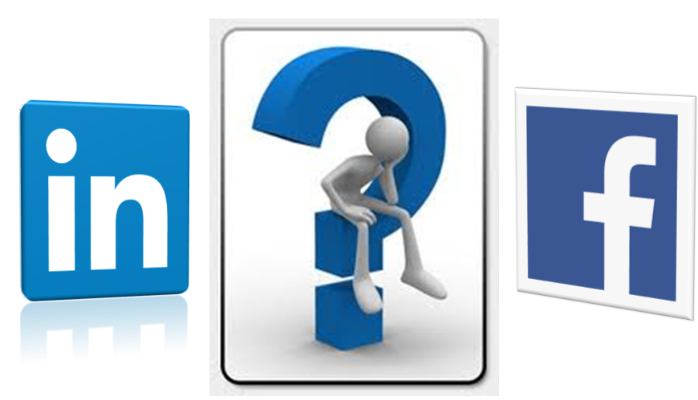 In the past couple of months I have noticed a lot of posts on LinkedIn urging the community not to use LinkedIn for the same purposes as facebook. Initially, I took no note of it. However, eventually, it started to sound a bit judgmental and patronizing to me. I believe in freedom of speech where I can post anything I want, within reason, on the social networks I’m active in; and who are these people judging my posts and deeming them not worthy of LinkedIn? Why are they saying that particular posts should be on facebook? Is facebook a catchall for lousy posts?

I am quite active when it comes to social networking. However, I do not share my personal stuff on any of them. For me, they are good tools to take my professional achievements to market. I am a firm believer that time to market (TTM) is key in terms of building your professional reputation. You have to get the news out as quickly as possible so that your professional reputation is enhanced immediately. In fact, I don’t even wait till after the event to post the stuff I do onto my social networks. I use my smartphone to quickly capture a few photographs, use Evernote to draft a quick caption, and post to my networks using their dedicated apps. My networks of choice are LinkedIn, facebook and Google+.

Frankly speaking, I post everything on Google+ first. It’s my “lab rat” network. I don’t think anyone is reading my posts on Google+. I post to facebook second. I want all my buddies to know what I’m up to at work. Another benefit is that I don’t need to talk about work when we go out for a drink. Instead I can talk about some other useless nonsense like politics, sports or religion. Now that’s good bar talk…

I post to IN last. This is where I build my professional reputation. Also, it helps me to keep a public record of all my professional achievements in the past few months; it makes writing that quarterly newsletter so much easier…. The best part is that I do all of this while my workshop participants are attempting an activity or something. Why do I do this? I do this so that my posts are viewed and liked before the other guys posts. Childish…. perhaps but no one cares about what I did yesterday let alone last week, last month or year.

Getting back to what to post where, I believe that you can post anything you want to any social network you are active in. However, a post I saw on IN the other day forced me to re-think my stand. This particular post was kind of a hateful post which ended with garbage cans and dog shit. When I saw that on IN, it made me realize that, yes, there are certain posts you really shouldn’t post on a professional network. That post changed my whole perception on the freedom of speech. Now, I believe in freedom of speech where I can post anything I want, within reason, on the social networks I’m active in provided that my post is at least marginally relevant to the community. The least I could do is not to mention garbage cans or dog shit on a professional network unless it leads to a new startup or invention.

Do you think this is a fair statement?